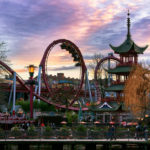 Tivoli Gardens amusement park in Copenhagen is a must for all visitors to the city, young and old. Tivoli is located just a few minutes’ walk from the city hall and with the Copenhagen Central Station as its nearest neighbour it is very easy to get to.

Tivoli Gardens was founded in 1843 and has become a national treasure and an international attraction. Fairy tale writer Hans Christian Andersen visited many times, as did Walt Disney and many other celebrities, who all fell in love with the gardens.

Part of Tivoli Gardens’ secret is that there is something for everyone. The scenery is beautiful with exotic architecture, historic buildings and lush gardens. At night, thousands of coloured lights create a fairy tale atmosphere that is completely unique. 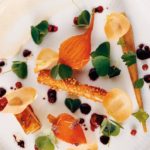 Famous Noma has moved to a new location and reopened with a new seasonal concept in February 2018.

The new Noma is located just one mile away from the old, and it now has an urban farm and a view over Christiania. The new Noma is quite impressive with seven buildings with different functions, although there is only 40 seats in the restaurant’s dining room.

Noma is a very popular restaurant, so it is important to book many months in advance. 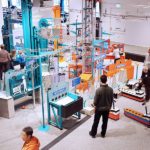 The Experimentarium re-opened in 2017 after a complete make-over. The science center truly is a celebration of curiosity, dedicated to playful science and offering hours of fun for the entire familiy.

Experimentarium brings science to life through hands-on exploration. Three indoor floors with 18 interactive exhibitions about science and technology, an interactive rooftop, science shows, a restaurant – the Experimentarium is huge and, not surprisingly, the place is especially popular with families.

National Aquarium Denmark, Den Blå Planet has water on all sides and is intended to give the visitors a feeling of being under water. The building has five “arms” from the center of the aquarium. That way the guests can choose their own way around the aquarium to see the exotic animals. 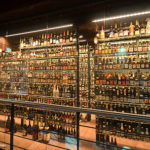 Experience the wonderful world of beer and hang out at the public Friday bar in the summer and join the many events taking place throughout the year.

Visit Carlsberg is among the largest tourist attractions in Copenhagen and visitors will get closer to the roots of Carlsberg, the history and the beer. Visit the historical epicenter of Carlsberg – a legendary landmark, where you can use all of your senses. You can smell the ingredients, discover authentic architecture, taste world-famous Danish beer in many styles and get a feeling of, what Carlsberg is all about.

You even have the option of meeting their four-legged ambassadors, the brewer horses, on your tour through the stables 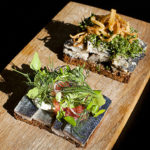 The moderne gastro temple is ruled by one of Copenhagen’s most renowned kings of smørrebrød.

Expect some of the best smørrebrød in town, but also gourmet dishes that leave the ryebread out prepared with ingredients you probably know but in flavour combinations you probably don’t.

At Aamann’s 1921 you’re immediately met by light, modern design, high ceilings, terrazzo floors, bright materials and impressive brass chandeliers in the beautiful space which also features old stone columns and church-like arches. Like the interior of the restaurant, the smørrebrød, snacks and dinner dishes served is prepared in a modern style with traditional ingredients and in aesthetically fashion. 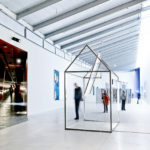 ARKEN Museum of Modern Art in Ishøj, south of Copenhagen, boasts exhibitions with the greatest Modernist artists alongside exhibitions of contemporary art – from new, young talent to established artists.

ARKEN is a great and monumental building situated in the artificial landscape, Køge Bay Beach, south of Copenhagen. The museum has one of Scandinavia’s finest collections of contemporary art, and the museum’s maritime architecture with the pointed stern, which majestically protrudes into the terrain, has won recognition both at home and abroad since its inauguration in 1996. 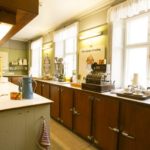 The Workers Museum is located in the Workers Assembly Building in central Copenhagen, dating from 1879, raised by the labour movement.

At the museum you can experience everyday life of the 1950s and visit the Sørensen Family who moved to Copenhagen in 1885. You can explore the development of industrial work and step in to the lives of working class kids in The Workers Museum for Children. Have a cup of 1950s chicory coffee in the original coffee shop and enjoy traditional Danish lunch in the authentic basement restaurant from 1892.